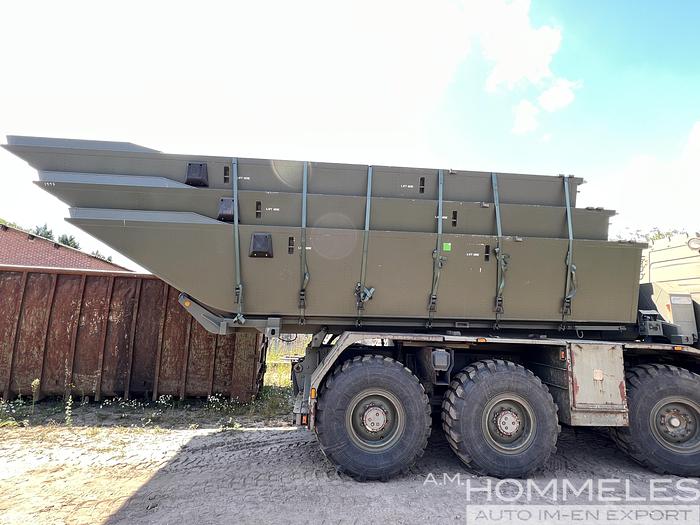 The APFB pontoon is powered by a SCHOTTEL waterjet driven by a Deutz air cooled diesel engine. The engine assembly is mounted in a lightweight frame, secured to the floor by four clamps and can be rapidly removed for either maintenance or complete in field replacement. The SCHOTTEL pumpjet is mounted by clamps in the floor of the pontoon and can also be rapidly removed for servicing. There are no protrusions on the underside of the pontoons, enabling the unit to operate in shallow or heavily obstructed water without problems of fouling. Steering is effected by rotating the jet outlet, which, with it's 360degree movement, provides the pontoon with a high level of manoeuvrability. The powered pontoon is primarily intended for use as ferry. However they can also be effectively used during the construction of floatingbridges, providing a rapid means of placing piers.

Each pontoon is of open top construction which allows stacking for transport and storage. The marine grade aluminium pontoons have sealed in build buoyancy which alone provides adequate floatation for the ferry or bridge structure. They are self draining and anchor winches are fitted as standard. Each pontoon has a (net) buoyancy of 12.000kg at 30cm freeboard. They can be stacked with three pontoons one inside the other to form a 2.7m high on a flatrack. Such a stack can be carried on a non dedicated truck of th DROPS type which can be used to launch and recover the pontoons.

The APFB Ferry’s six pontoons are stackable (nested) and are carried on two dedicated DROPS flatracks with one powered and two standard pontoons per vehicle.

A built-in release system launches the pontoons sequentially into the water. An integrated winch system within each DROPS flatrack recovers each pontoon after use.