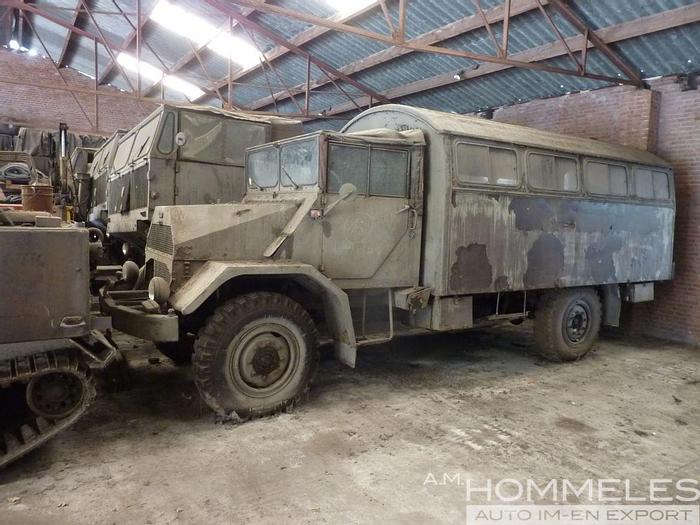 History : When it came to equipping the newly founded Bundeswehr, the decision in favor of the Ford G398SAM was made in the NATO three-ton class, not least because of the cheapest offer. This enabled the Cologne team to prevail against Borgward, Mercedes and Magiru-Deutz.

Technically, this off-road type is similar to the civil V8 truck with all-wheel drive. The 3,924 cc petrol engine is based on the pre-war V8 and develops 92 hp. The antiquated side valve with militarily suppressed ignition system helped the Ford to achieve a very high top speed, but it was prone to failure and thirsty.

In addition, the truck, dubbed "NATO goat" by the soldiers because of the "grumbling" engine noise, has a high center of gravity and tends to tip over when cornering. Because only the box bodies had shock absorbers, the flatbed relied on the friction of the leaf spring layers. The narrow chassis was simply overwhelmed with the wide axles and driver's cabs and twisted too much.

The Bundeswehr awarded the development and parts of the construction contracts for the three- and five-ton standard suitcase to Peter Bauer. Bauer manufactured a total of 2,582 box bodies for the Ford G398SAM-S3, which were set up as staff, workshop, radio, kitchen and ambulance vehicles (Lkw gl geschl Großraum KrKw - that's the army designation with the 4 m long and 2.2 m wide case). The special cases included a vehicle with a mobile tower for setting up a field airfield, a reconnaissance radar carrier and a tracking device. A disadvantage of the suitcase was its low height, so that activities while standing were basically not possible.

From 1957 to 1961, the Cologne plant delivered a total of around 8,000 3-tonne trucks with flatbed and box bodies to the Bundeswehr (and a few civilian customers such as DRK and THW), all of which had a standard driver's cab.

5,446 vehicles were equipped with flatbeds and tarpaulins for material transport. If people were carried on the loading area, the maximum speed was limited to 50 km / h. Old Ma-2 starter vehicles were simply placed on the Ford platform so that it had a second driver's cab "piggyback". Meiller in Munich equipped some vehicles with a 2.8 m³ three-sided steel tipper body. However, no further procurement was made because the vehicle did not meet the requirements. When the skip was fully loaded, the vehicle frame was simply overwhelmed. All trucks were designed to mount a front-end winch with 4,500 kg pulling power - but only a few in the troop were equipped with it.

In 1975, with the exception of a few special vehicles, all three-ton trucks were taken out of service and then often ended up with the Red Cross, the Johanniter Accident Aid or the fire brigades. This also ended the short era of the all-terrain 3t class in the Bundeswehr; because the procurement of successor models was refrained from